On one of the lavender walls at Le Place hangs an oversized photo of the late Pam Pinault.

Pinault is smiling out at the bar as if she is its kindly guiding light.

In a way, that is exactly what Pinault and her life partner, Lucy Langevin, have been these last 40 years. Guiding lights in a storm, the two women shepherded New Bedford’s LGBTQ+ community through decades of public rejection and private partying that finally found its rainbow in the years following the state and federal legalizations of same-sex marriage.

Le Place was not the first gay bar in New Bedford, but it is the one that has lasted.

Through countless AIDS fundraisers and parties and celebrations, the evolution of a music scene that featured some of the top DJs in the city, through sports raffles at Sunday football games, block parties on the street with roasted pigs, and crowded tea dances on the deck on summer nights, it has thrived.

“There’s been hundreds and hundreds of surprise parties, of birthday parties, of engagement parties,” remembered Lucy, who said she and Pam (who died in 2019) didn’t really start out to provide a safe place for the New Bedford gay community but somehow that’s what their pub became.

Located in an out-of-the-way pocket of Hicks-Logan, a gritty industrial and residential neighborhood in the near North End, Le Place casts its indigo light on a dark neighborhood, hard by the Interstate 195 underpass. But after nightfall its purple and pink neon somehow transfigures both its patrons and the surrounding neighborhood.

Pam and Lucy were working for lawyers in the early 1980s when they thought to themselves that other people were making money running bars, why couldn’t they? They also opened another bar in Fairhaven and a travel agency, but it was Le Place that evolved into New Bedford’s gay mecca.

“Being in the gay community (myself), they all came to see me,” laughed Lucy. “They came to see us, and it took over more and more. And it became Gay Cheers, they call it.”

Despite Le Place’s success, Langevin said she does not want to paint the 40 years as all Bud Lite and cocktails. It wasn’t. She remembers the New Bedford of her youth as a time when two women were once arrested for holding hands in public at a summer festival.

“Very hard,” said Lucy, breaking down for just a second as she thought back on those days.

“So this was a safe haven,” said Tracy Pinault, Pam’s daughter. 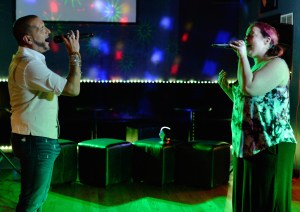 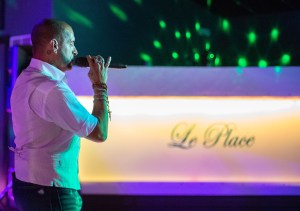 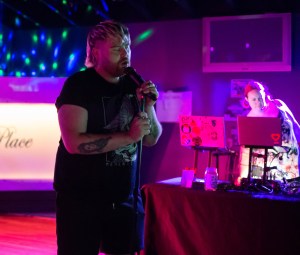 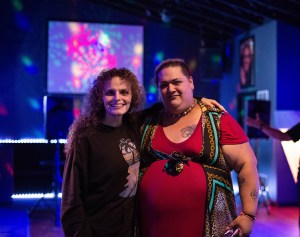 Customers and friends enjoy the live Karaoke inside of the bar. Credit: Michael Morrissey / The New Bedford Light 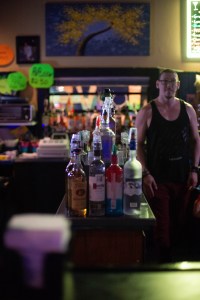 the bar inside of LePlace lined up withall types of alcohol. Credit: Michael Morrissey / The New Bedford Light 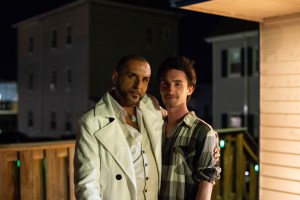 Two customers of LePlace on their way into the bar. Credit: Michael Morrissey / The New Bedford Light 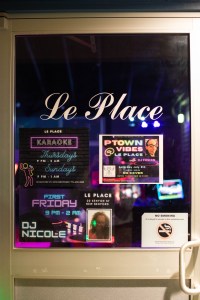 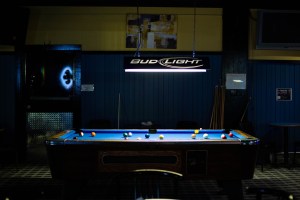 a pool table ready to be played inside of LePlace. Credit: Michael Morrissey / The New Bedford Light 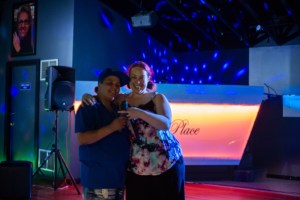 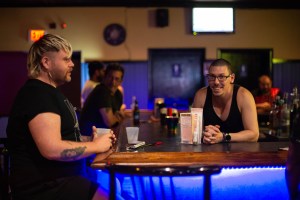 LePlace customer and bartender pose for a photo at the bar. Credit: Michael Morrissey / The New Bedford Light 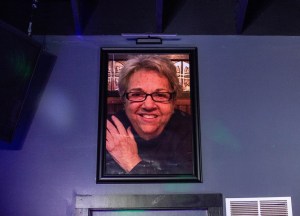 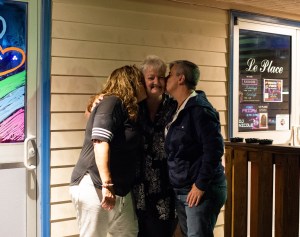 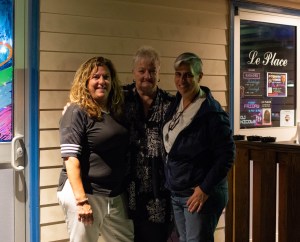 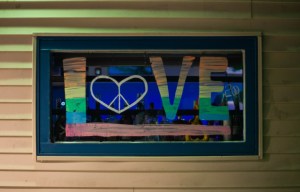 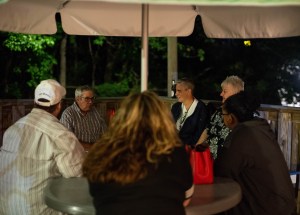 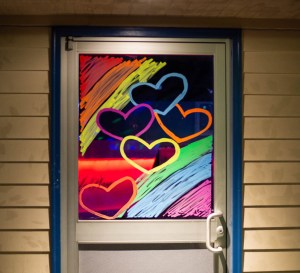 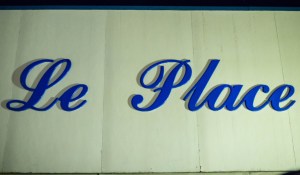 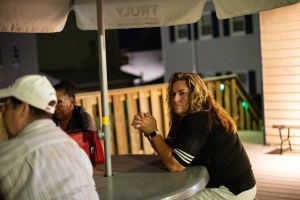 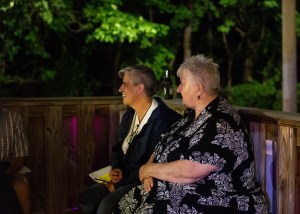 Tracey Pinault (Left) and Lucy Langevin, Owners of LePlace, talk of past stories since the opening of LePlace. Credit: Michael Morrissey / The New Bedford Light 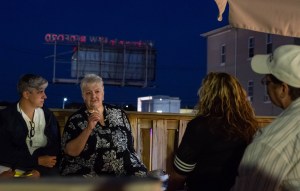 In the early years, Le Place weathered vandals pulling fire alarms in the middle of the night, punks opening their front door and throwing firecrackers into the bar, someone setting the club on fire causing serious smoke damage (New Bedford police solved the arson), and the horrifying triple shooting and hatchet attack at Puzzles, Le Place’s onetime fellow gay bar further up the street in the North End.

“It might sound like this has been an easy road (but) it’s been a long road, and not so easy,” Langevin said. “Because the gay community was not accepted.”

The women and men who came to Le Place, however, came to think of themselves as a family, and they were protective of each other and the club.

After the Puzzles attack, they hid baseball bats and pipes around the establishment.

“We were scared they were going to come over here,” Lucy said. “But they (the patrons) all rallied. People looking out the doors and the windows.”

“You never know. Are they coming for here next?” explained Tracy. “Even though he (the Puzzles attacker) fled down South, and he was gone, but is that next guy going, ‘Oh, if he did it, I could do it too!’”

After the arson fire, the Le Place regulars rallied and fixed the mess themselves.

“It was mostly smoke damage. All the kids that hung around here said, “Get a dumpster!” remembered Lucy.

Pam got the dumpster and the bar’s regulars went to work so that all Pam and Lucy had to do was hire a contractor for the restoration work.

“They (the kids) were here every single day throwing out anything damaged, anything smoky, the bottles. They cleaned themselves,” she said.

The family atmosphere is what Pam’s two daughters, Tami and Tracy, grew up with at Le Place. They were 10 and 9 years old when Lucy and Pam opened the bar.

So they were raised there, coming with their mother every day, helping with the cleaning and getting things organized before opening time.

“Oh yeah, we used to have sodas, Shirley Temples, bags of chips, shoot pool. Are you kidding me? We were in big. We were in Disney World,” said Tami.

Some of the customers taught Tracy how to play pool and she became so good at it, she’d run the table, beating everyone in the bar. Pam had to pull her aside one day and say let the customers win sometimes. You’re 10!

The customers, however, would help out with the girls when they were bored, watching them play pool or video games. There was a patron named Billy who gave the youngsters $5 each time he saw them. Billy, whom Tracy described as “a beautiful soul,” died last year and the bar had a fundraiser for his final expenses.

He was just one of several treasured regulars – both employees and customers – who became a special part of the establishment, and the family members insisted on mentioning the roles that Billy, Brian, Woody (Deborah) and Missy played in Le Place’s identity for four decades.

Tami and Tracy, both LGBTQ themselves, have inherited their mother’s portion of the bar and now run it with Lucy. Many of the patrons have literally watched them come of age and become adults, akin to an extended family.

“So through the years, when we come now, people will hug us,” Tracy said. “Like it’s so nostalgic because they’ve seen us grow, and we’ve seen them grow, and like different occasions throughout the years, get married or whatever.”

The bar even opens on Thanksgiving Eve and late Christmas Day, explained Traci Welch of the South Coast LGBTQ+ Network, noting that some of its patrons don’t have families they can go to. “There’s certain things they do that other bars won’t do,” she said. “They know how important it is to have someone saying ‘Hey, I’m here for you.’”

“You would think Christmas Day! But people come running,” said Lucy. “Either they’re sick of their families or they have nowhere to go.”

So Le Place has had this mixture of good dance music, a more communal atmosphere than some LGBTQ+ establishments in bigger cities like Providence and Boston, and a milieu nowadays that is eclectic, with any number of straight people coming for the dancing.

“We had the best music so everyone came from wherever they were to come here for last call,” said Nicole Lopes, who has DJed at Le Place for many years.

Give monthly and help sustain The Light’s reporting!

Nicole has more than a few good stories about life in a gay bar, including ones about the big mirrors on the side of the dance floor which she could see from the DJ booth.

“Everybody loved the mirrors, looking at themselves,” she said. “I mean, if I could tell you what I’ve seen in that DJ booth, you would never believe me.”

It is Nicole who puts the purpose of the “tea dances” – which originated in the New York City gay community in the 1950s and ’60s as a safe place where gay people could dance and meet without harassment – into the dishiness of traditional gay culture.

Lucy interrupts to say the real draw for the tea dances, which are run the third Sunday of the month from 4 to 8 p.m., is Nicole’s great DJing.

“You talk s— over the great music,” said Tracy.

“Even while they’re dancing,” said Lucy.

Southcoast LGBTQ+ restored the tradition of the tea dances at Le Place several years ago as a homage to the early years of the gay pride struggle. Le Place has been there for the support organization, staging the city’s June Pride event for several years when the former group that sponsored it disbanded. During the AIDS crisis, a New Bedford support group called A.I.D.S. raised thousands of dollars at Le Place fundraisers for local victims of the deadly disease.

But as times have changed and LGBTQ+ people have been more accepted and visible, the need for gay bars as a place of refuge has decreased. Lucy says that nowadays, Le Place has become one of New Bedford’s most popular dance establishments for all kinds of people because of the quality of its music.

They say, “You guys got the best DJs. We have a whole new troupe of bartenders, they’re well loved.” Tami herself has become one of those popular bartenders.

Tracy said she thinks Le Place’s enduring popularity has to do with love. “My mom and Lucy,” she said, “but if you ever spoke to anyone, my mom (Pam) exuded and exemplified love and acceptance and compassion.”

Even newcomers notice it, she said.

“I’ve had people come in and tell me that, the first time in. ‘I just feel so comfortable here. It’s almost like you’re getting a hug when you walk in.’”

Lucy said that not too long ago a straight couple who had come to a tea dance introduced themselves to her.

And he said, “‘You don’t remember me, do you?’ I said, ‘I’m sorry I don’t.’ He said ‘I was one of those punks that used to open the door and yell and throw things in.”

Tracy then piped up and said, “And one of the girls said, ‘Oh, I was the girl who chased you with the bat.’ He goes, ‘Oh, nice to meet you.’”

“He said he was so sorry and he loves coming here,” Lucy said. “And he’s straight.”

The 40th anniversary of the opening of Le Place is July 15. The 15th is on a Friday so Le Place will hold a “throwback party” that night. Then the big celebration will be on Saturday, July 16. Both days there will be outside DJs from 4 to 8 p.m. and after 8 p.m. the DJs will move inside until 2 a.m.

Walking the walk and talking the talk with Ward 3 candidates

Thank you to our sponsors

Help keep The Light shining with a gift today

Podcast: Hear what students have to say on environmental curriculum standards