NEW BEDFORD — The arrival of dozens of undocumented immigrants on Martha’s Vineyard this week is raising concern in New Bedford’s immigrant community and sharp comment in the Bristol County Sheriff’s race.

“The governors of Texas and Florida — Governors DeSantis and Abbott — are doing exactly what they promised they would do for [their constituents], which is to protect them and uphold the rule of law,” Bristol County Sheriff Thomas M. Hodgson told The Light.

Though sheriffs in Massachusetts are not law enforcement officials (instead, they oversee departments of correction), Hodgson has made a reputation for outspoken comments on immigration policies and their enforcement. In 2017, Hodgson offered to support then-President Trump’s border wall by sending Bristol County inmates as laborers.

Moving these near 50 migrants without advance warning “makes all the sense in the world,” Hodgson said. “If anybody’s angry about this, they ought to be angry with the local officials who have set up these sanctuaries for people to be sent to.”

Paul Heroux, the Democratic challenger for sheriff, defined his primary campaign by differing from Hodgson on issues of immigration. After hearing Hodgson’s statement on Friday, Heroux called it a “publicity stunt.”

“The sheriff should be focused on reducing what is currently the highest rate of reoffending in the state. That’s where my main focus will be; reducing inmate reoffending so we can stop the revolving door,” Heroux said in a statement. 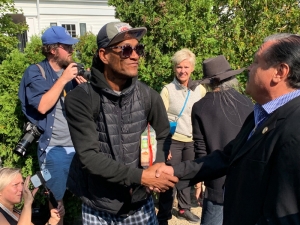 A migrant bids farewell to Edgartown and shakes the hand of Domingo Garcia, president of the League of Latin American Citizens. Credit: Courtesy of the Martha's Vineyard Times 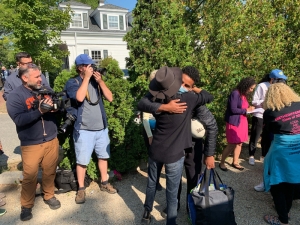 A migrant thanks one of the many residents of Martha's Vinyard who sprang into action. Credit: Courtesy of the Martha's Vineyard Times 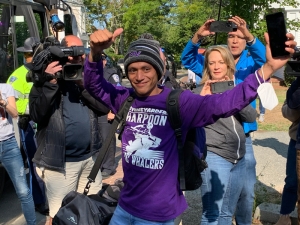 Despite difficulties, some migrants display good spirits as they board VTA buses. Credit: Courtesy of the Martha's Vineyard Times 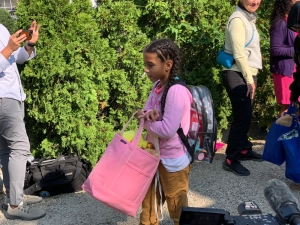 On Wednesday, Florida Governor Ron DeSantis sent two planes carrying about 50 mostly Venezuelan migrants from the Texas-Mexico border without any advance notice to Massachusetts officials. The migrants were reportedly told the flights were headed to Boston, where their immigration papers could be fast-tracked.

“They were basically dumped in the Vineyard with a lot of misinformation because the governor decided he wanted to prove something politically,” said Helena DaSilva Hughes, director of New Bedford’s Immigrants Assistance Center.

Massachusestts officials brought the migrants, some of whom are children, to Joint Base Cape Cod on Friday. The facility is providing “wraparound services,” including dormitories, food, health care, and legal services, according to Gov. Charlie Baker’s announcement. The governor also activated up to 125 members of the Massachusetts National Guard to help.

DaSilva Hughes said she finds it sad that politicians are using immigration as a “political football” at election time.

“To me, what is scary is we are using the most vulnerable population that just arrived as scapegoats to make a point,” she said

One of DaSilva Hughes’s top concerns is that the migrants are now thousands of miles away from states where they may have immigration court hearings scheduled. She also said it could be a challenge to find them housing, especially if they end up in places like New Bedford, where the market is already extremely tight.

“Rent is so expensive,” she said. “We’re talking about immigrants who really need a lot of support.”

The Immigrants Assistance Center has been receiving calls from community members asking how the organization plans to help, but DaSilva Hughes says it’s too soon to know what needs to be done. It isn’t clear how many — if any — of the migrants will come to New Bedford.

Thank you to our sponsors

Help keep The Light shining with a gift today

The sound of silence: Beloved Folk Festival ends ‘on a high note’

Chris Mello embraces the comfy life, but when he dresses up ‘it’s like a holiday’