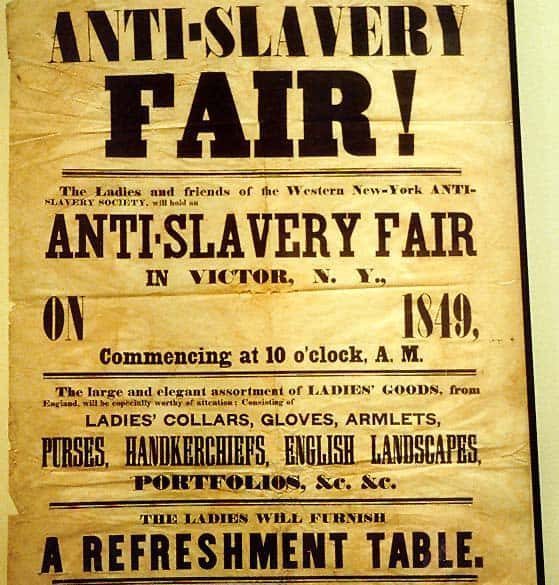 Come spend your Sundays with at the park. Sundays through Sept. 25 the 1850 ladies will explore different topics on Abolitionist fair in New Bedford. How did New Bedford play a role in the abolitionist movement?

End your day with an Underground Railroad tour with a ranger at 2:30 p.m.

Abolitionist Fairs were about raising money or financial support in eradicating slavery. They started in the 1830s and continue through early 1860s. They were usually the efforts of women selling goods and discussing ideas on how to end slavery. Some wrote pamphlets and giftbooks, others circulated petitions, and some spoke before men and women. There were also some contributions from wealthy men. Charles Fox Hovey, a Boston merchant, left $8000 annually until the trust of about $40,000 would be exhausted for the promotion of Anti-slavery cause and other reforms. According to Manisha Sinha in her book, The Slave’s Cause: A History of Abolition, abolition was a radical, interracial movement, one which addressed the entrenched problems of exploitation and disenfranchisement in a liberal democracy and anticipated debates over race and labor.

Here in New Bedford, abolitionism was very strong. Fugitives were welcomed and protected. Abolitionist Amelia Piper was one of the earliest organizers of the anti-slavery fair in New Bedford. Female abolitionists supported the activities of the Anti-Slavery Society by collecting and selling the autographs of famous men and women and by selling specialized handiwork and baked goods. The fairs were usually held once a year in New England cities which would take turns hosting the events.

Ruth and Abby, the 1850s ladies, are part of the living history program of New Bedford Whaling National Historical Park. It projects a human face to convey a sense of the everyday life of women in New Bedford during the prosperous whaling era. Join them and see history through the eyes of people who lived it and get a real feel for the time period. The ladies encourage people to interact, ask questions, and have fun learning about New Bedford.